1. Psychology as a Healthcare Profession

2. Psychology as a Science

4. Training and Education in Psychology

An APA for All Members!

On July 8, 1892 a group of 31 diverse individuals met at Clark University to form the American Psychological Association with a vision for “a new psychology”. When 18 of them subsequently met at the University of Pennsylvania that December, the foundations were laid for a scientific psychology that focused on professional goals. Is APA in a position to continue to realize both the scientific foundation and professional goals outlined by our forefathers?

Psychology has not yet achieved the dreams that we were given. In some cases psychology is viewed as a second-class citizen in the world of science and health care. I am sick and tired of being as perceived as such. I first understood what it was to be a second-class citizen (actually an “Alien” is what they called me) when I emigrated from Cuba at 9. I did not know English nor American culture; did not even have enough to eat.  Now that I have learned English and am now a psychologist, I find myself again being perceived as a second-class citizen. I have grown impatient with that station in life and I am sick and tired of this inequality.

I am disgruntled with university administrations’ believing that we are not a STEM science. Psychology should not be taught to large enrollment sections simply for economic reasons. It is embarrassing that only 50% of our students secure APA internships. I am in disbelief about the limited engagement that psychology has with our diverse world. I am through with physician colleagues receiving better reimbursement and access to clinical opportunities.

It is, however, a time of hope, of dreaming, and of excitement. That is what my students- from undergraduates to post-doctoral fellows as well as what my colleagues, clinical and academic, from both here and abroad, tell me. That is what my two children in psychology tell me- Krista, a PsyD, in Florida and my older son, Nicolas, a PhD, who is starting his post-doctoral fellowship at Hopkins. That is what my son, Lucas, who is studying political economics and what my wife, Linda, who has secondary multiple sclerosis, also say. And that is what I have come to believe. This is not a time of desperation and learned helplessness. It is indeed a time of hope, of dreaming and of excitement as well as a time to finally give psychology away.

However, dreaming without with direction is nothing more than moving clouds. I was faced with two options many years ago: 1) Give up and adapt to this second class status and the present unfortunate situation or 2) do something about it. And for a quarter of century I have dedicated myself to eradicating this situation and the incorrect perception of who we are and what we can do to make the world a better place.

Let me provide one example of what I have done to secure our future. I started, with the help of Sally Cameron, the Executive Director of the North Carolina Psychological Association, when I became President of our state association, and asked Blue Cross and Blue Shield of North Carolina to allow me to bill for neuropsychological services. With the audacity and enthusiasm of an adolescent, I asked to be payed for what I knew which was based on science and experience That resulted in eventually APA, through APA’s Practice Directorate, appointing me as the first psychologist and one of 10 non-physicians (HCPAC) to the AMA CPT Advisory Panel of 120. After 15 years of fighting in the trenches for psychology in the HCPAC (and most recently for the psychotherapy codes we are all now using), I had the dream of being part of the actual panel. I wanted to shift my role from advisor to policy maker. With luck and who knows what, I now sit on that 17 member panel with the same vote as Medicare, Blue Cross Blue Shield, Hospital Association of America and others.

We must refocus our vision to foster a “new psychology” based on scientific foundations and professional goals.

I believe in being able to change systems. I believe in, our science, our profession and in our ability to understand and serve ALL people. It is our future and it is our psychology. Finally, I believe in a dream of working together to place psychology where it rightfully belongs- as a leader.

It is time for Psychology.

WILL YOU WORK WITH ME TO MAKE THIS DREAM COME TRUE?

View the results from the campaign’s surveys

Since 1982, I’ve maintained a private practice limited to clinical neuropsychology. In 2002 I founded and now co-direct (with a PharmD) a bilingual mental health clinic for the poor and uninsured in our region (Cape Fear Clinic).

I have authored/edited 8 books, 78 book chapters, 102 journal articles (English, Spanish and Russian). My research focus has largely been on the interface between culture and clinical neuropsychology. I founded and edited Neuropsychology Review, the Journal of Interprofessional Healthcare, and a book series in clinical neuropsychology (33 books). I have lectured in over a dozen countries and supervised fellows or visiting scientists from Mexico, Russia, South Africa, and Spain. I have taught over 7,500 undergraduate students, supervised 30 graduate students and 6 post-doctoral fellows.

Between 1993 and 2008, I was APA’s representative to the American Medical Association’s Current Procedural Terminology panel and was then elected to the Editorial Panel of the CPT (voting member). I also was on the Center for Medicare and Medicaid’s Medicare Coverage Advisory Committee.

I am married to Linda with whom I have three children (Krista- a clinical psychologist at a psychiatric hospital in Florida, Antonio Nicolas- a PhD student in clinical psychology at Georgia and completing his internship at Duke, and Lucas- a PhD student in political economics at Stanford). I have vigorously served psychology as an advocate and leader, the public in my clinical practice, the scientific community (in the US and abroad) and generations of students as a professor of psychology. I understand, live and have lead in all aspects of our diverse psychological community. 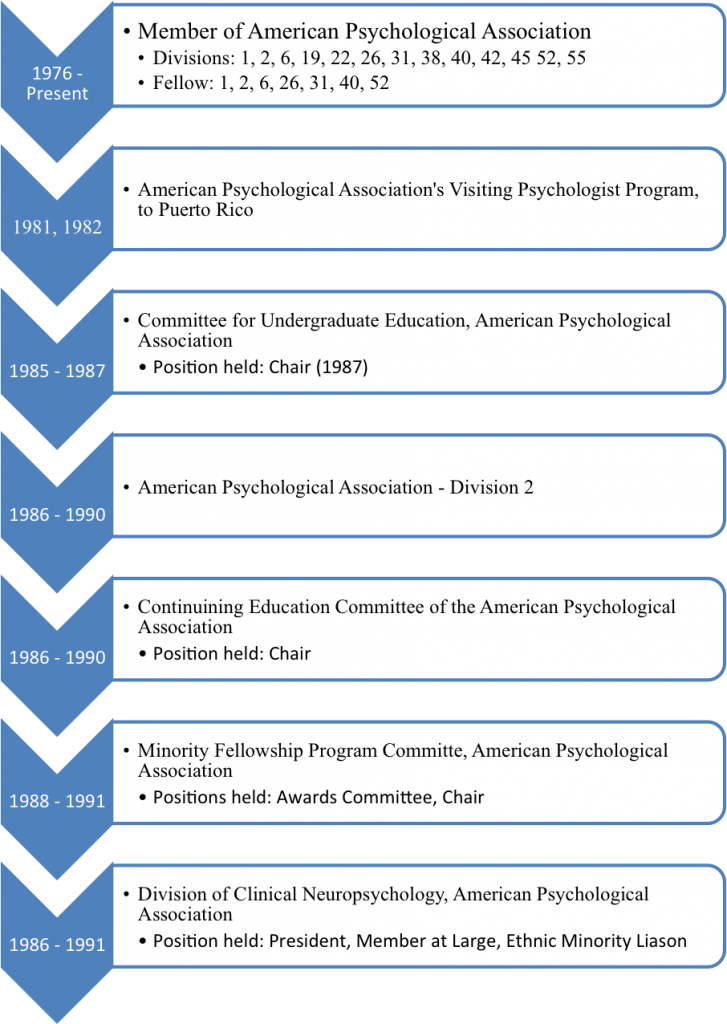 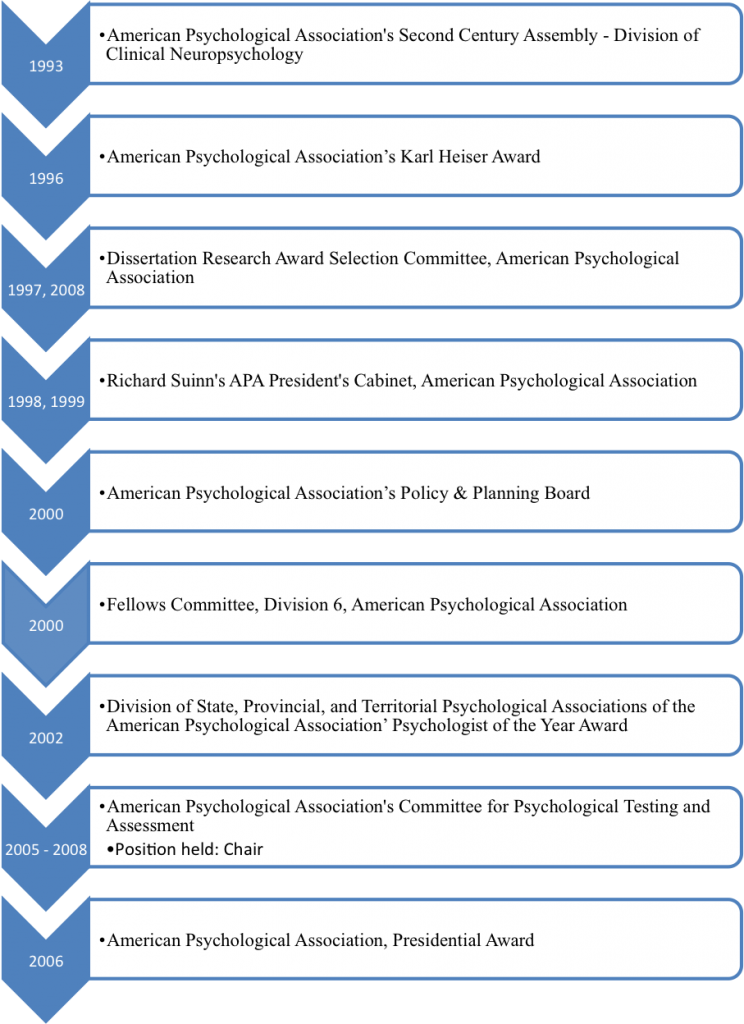 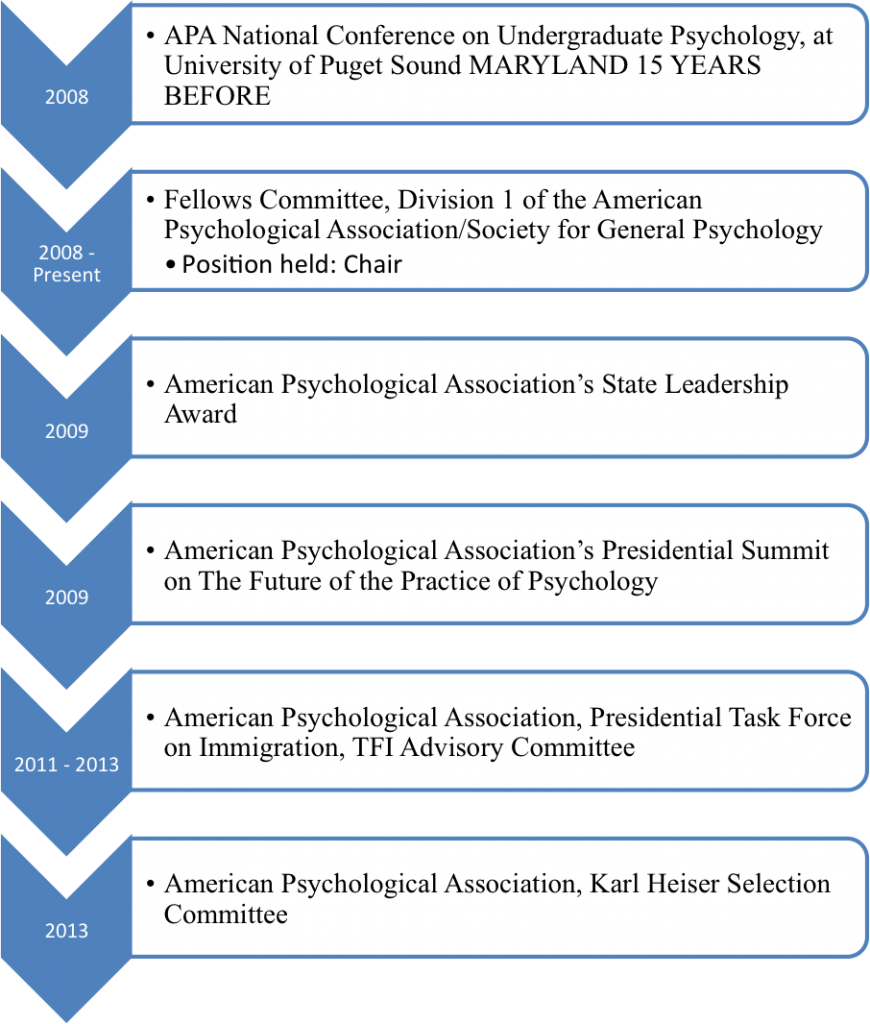